As I consider the significance of this feast day, I feel it safe to assume that everyone’s concept of family depends on her/his personal experiences. I grew up in a Catholic Italian family, where God, family and food were central to everything we did, said and believed. You could also throw in a side of ‘sports’ as well, but primarily for entertainment. Devotion to family however was sacred and next in importance to devotion to God and Church. That said, think about the ways in which our family life has influenced the persons we’ve become. Growing up, did you think as I did, that you would be different than your parents, only to find out that in reality, you’re very much like them in many ways? That’s what I think about when I consider Jesus’ upbringing by Mary and Joseph. I can’t help but believe that he became the man (and messiah) he was in large measure due to the influence of his holy parents. So, on this feast of the Holy Family, I’d like to share with you a perspective on “holiness.” 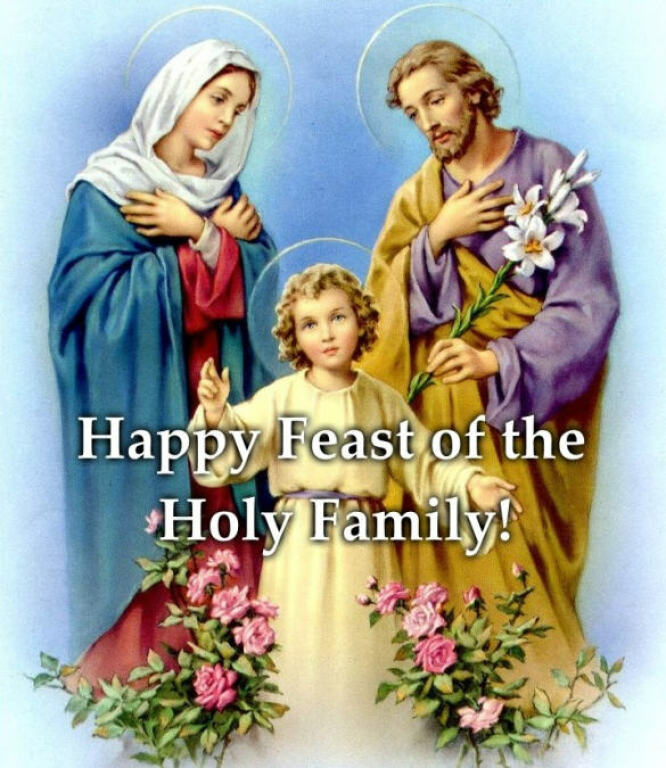 Beside the Holy Family’s obvious love for God and the Jewish faith they practiced, they were genuinely ‘good’ people. They lived traditional family values, rooted in love of God and neighbor, as prescribed in the precepts of the Ten Commandments. More than that however, each one of them was very much her/his own person. In other words, their holiness was in part the result of being true to the person God created them to be. They were holy because they were whole! Thus the question I encourage all of us to consider is this: am I on a path toward wholeness (holiness) according to God’s plan for me? In other words; am I becoming the person God created me to be? If so, how will I know? If not, is it too late? Let me start by answering the last question: It’s NEVER too late? God isn’t looking for perfection. God is looking for faith and an honest effort to become holy, which is more of an aspiration than a goal, as attested to by the holiest of saints, who always felt that
they were the greatest sinners. You see, no matter how holy we are, we can always do better, with the help of God’s grace.

How do we know we’re becoming the person God created us to be? In my experience, our bodies and emotions are the good indicators. Look, we’re all sinners, but in spite of that, are you feeling a sense of peace/contentment? If so, you’re likely on the right path. If not, there are likely things in your life that are misaligned with God’s plan for you. On that note, I’ll end here, but will continue next week to conclude my reflection on holiness by way of contrasting the difference between spiritual “darkness” and “light” as revealed in sacred Scripture on the feast of the Epiphany of the Lord.

There are no comments yet - be the first one to comment: