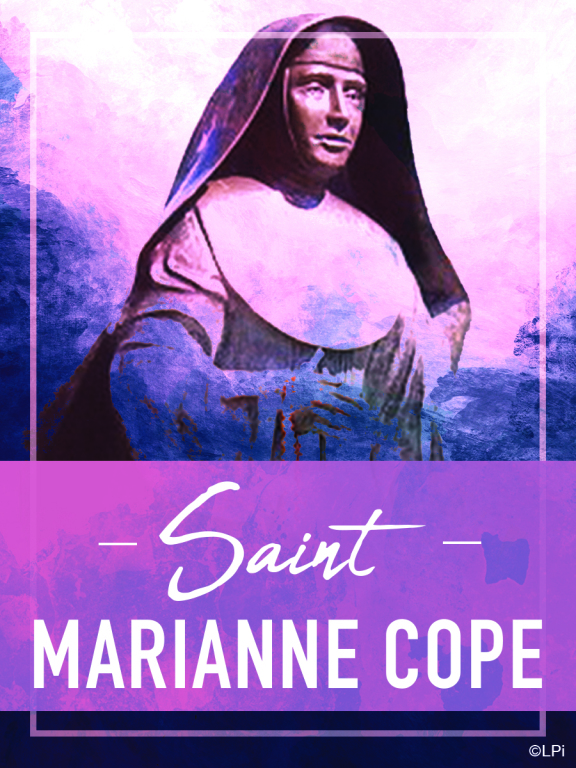 Short Bio — Great for social media or in your bulletin
St. Marianne Cope immigrated to the USA from Germany when she was a child. A gifted leader, she oversaw schools, hospitals, and missions during her long life. Most notably, she volunteered to provide care to those outcast with leprosy in Hawaii.

Biography
Barbara Koop, later Mother Marianne Cope, was born in Germany on January 23, 1838, and immigrated with her parents to New York when she was 2 years old. In August of 1862 she went to the sisters of the Third Order of Saint Francis in Syracuse, New York and took her vows the next year. Her early religious life saw her working as a teacher and administrator for local Catholic schools until she was called upon by the bishop to use her administrative skills as superior of St. Joseph’s Hospital in Syracuse, New York. She devoted herself to the care of the sick and infirm and the hospital flourished under her leadership. As the Provincial Mother of her order in Syracuse, Cope, along with six other sisters, she answered a call made by the Hawaiian government to run the Kaka'ako Branch Hospital on Oahu that served as a receiving station for people suspected of having leprosy.

Of the more than 50 religious communities in the United States and Canada who were asked by the government to help the suffering communities and hospitals for those with leprosy (Hansen’s disease) in Hawaii, Mother Marianne and her sisters were the only ones to answer the call. They immediately got to work transforming the hospital environment for those with leprosy and their families. Of this mission, she said —

“I am hungry for the work and I wish with all my heart to be one of the chosen ones, whose privilege it will be to sacrifice themselves for the salvation of the souls of the poor Islanders.... I am not afraid of any disease, hence, it would be my greatest delight even to minister to the abandoned ‘lepers’.”

In 1888, Mother Marianne and two sisters took on an even more challenging assignment and went to the Hawaiian island of Molokaʻi, a leper colony, to open a new home devoted to the protection of girls and women with leprosy as well as to take charge of the home that her friend, Saint Damien de Veuster, had established for men and boys. She helped improve life on the island by introducing pride, cleanliness, and a little fun to the colony. She often provided bright scarves and dresses for the women she served and cheerfully carried out her mission until she died on August 9, 1918. While in service, she was awarded the Royal Order of Kapiolani by the Hawaiian government for her selfless love and care of those in need and never contracted leprosy. She was canonized in 2012.

There are no comments yet - be the first one to comment: