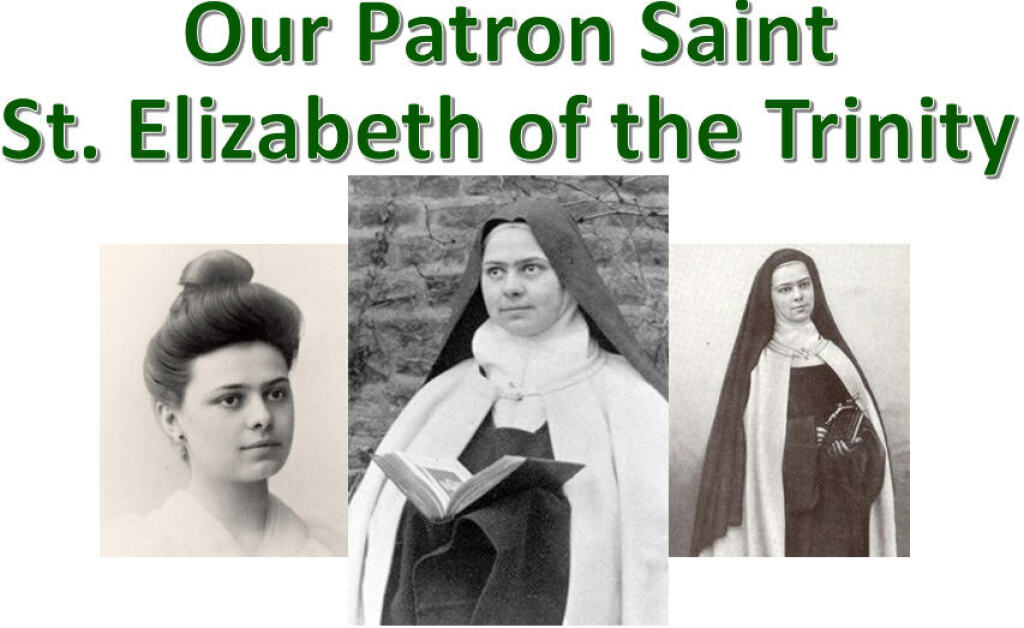 ST. ELIZABETH OF THE TRINITY

St. Elizabeth of the Trinity, O.C.D. was born Elizabeth Catez on July 18, 1880 in a military camp in France. She died on November 9, 1906 at the young age of 26 from Addison Disease. Her feast day is celebrated on November 8th. She was a French Carmelite professed religious in addition to being a mystic and spiritual writer. She was known for her spiritual growth as a Carmelite. She was however acknowledged for her persistence in pursuing the will of God and for her devotion to the charism of the Carmelites. Elizabeth of the Trinity gave her love for the spiritual life, and her desire that all should grow in this life, to all Christians.

She expressed what she wanted to do in heaven as follows: "I think that in heaven my mission will be to draw souls by helping them to go out of themselves in order to cling to God by a wholly simple and loving movement, and to keep them in this great silence within, which will allow God to communicate himself to them and transform them into himself." With these profound words, she challenges Christians of today to stop, take a good, long look within themselves and ask: Where am I going? What priority does God have in my life? How am I being transformed in God?

She was also a gifted pianist and had strong feelings for the Carmelite charism from which all her desires were fulfilled. Of her experiences she wrote “I can’t find words to express my happiness. Here there is no longer anything but God. He is All; He suffices and we live by Him alone”.

Pope John Paul II celebrated her beatification in Paris on November 25, 1984; Pope Francis approved her canonization on March 3, 2016. She was canonized as a saint on October 16, 2016 by Pope Francis

The Life of St Elizabeth of the Trinity, by Deacon Ernie!

All we know of Barnabas is to be found in the New Testament. A Jew, born in Cyprus and named Joseph, he sold his property, gave the proceeds to the Apostles, who gave him the name Barnabas, and lived in common with the earliest converts to Christianity in Jerusalem. He persuaded the community there to accept Paul as a disciple, was sent to Antioch, Syria, to look into the community there, and brought Paul there from Tarsus. With Paul he brought Antioch's donation to the Jerusalem community during a famine, and returned to Antioch with John Mark, his cousin.

Maria Francesca Cabrini was born in Sant'Angelo Lodigiano, Italy on July 15, 1850. Died at the age of 67 in Chicago, Illinois on December 22, 1917. Canonized July 7 1946 by Pope Pius. She was the first naturalized citizen of the United States to be canonized by the Roman Catholic Church, Her Feast Day is November 13th.

She was born two months premature and the youngest of thirteen children. Unfortunately, only three of her siblings survived past adolescence and Frances would live most of her life in a fragile and delicate state of health.

Frances became dedicated to living a life for religious work from a young age and received a convent education at a school ran by the Daughters of the Sacred Heart. She graduated with high honors and a teaching certificate.

When Frances was 18, she applied for admission to the religious congregation of the Daughters of the Sacred Heart, but was turned down because of her poor health. Instead, a priest asked her to teach at the House of Providence Orphanage in Cadagono, Italy. She taught at the girls' school for six years and drew a community of women in to live the religious way of life.

Generations of Catholics have admired this young saint, called her the "Little Flower", and found in her short life more inspiration for their own lives than in volumes by theologians. Yet Therese died when she was 24, after having lived as cloistered Carmelite for less than ten years. She never went on missions, never founded a religious order, never performed great works. The only book of hers, published after her death, was an brief edited version of her journal called "Story of a Soul." (Collections of her letters and restored versions of her journals have been published recently.) But within 28 years of her death, the public demand was so great that she was canonized.